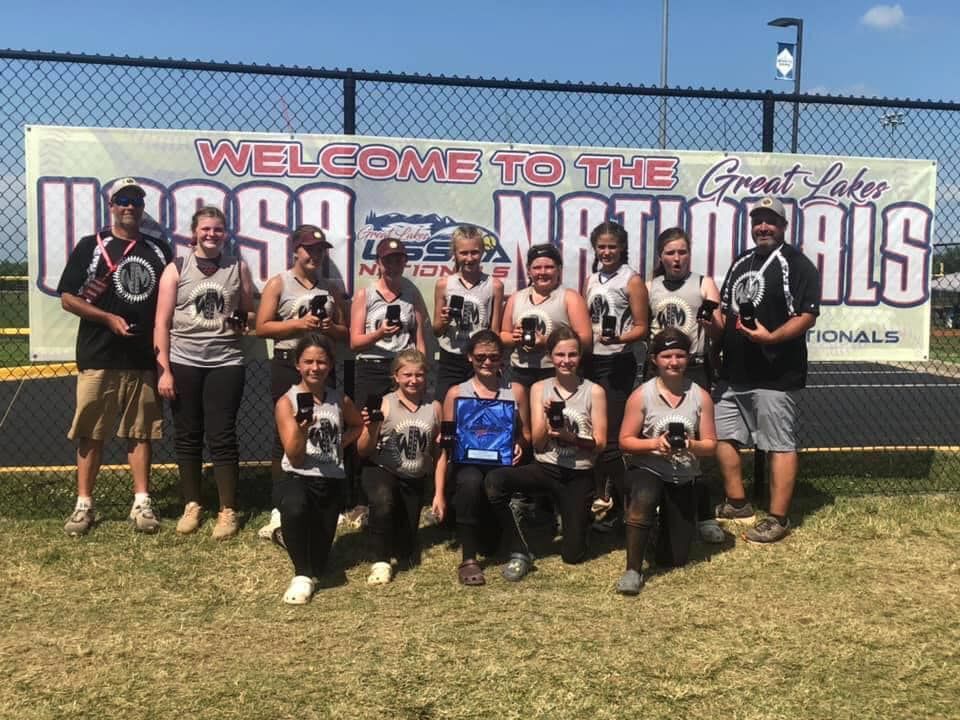 The Wabash Mission 07 (12U) softball team poses following its second-place finish in the USSSA Great Lakes National Tournament. They finished the tournament with a 7-2 record. 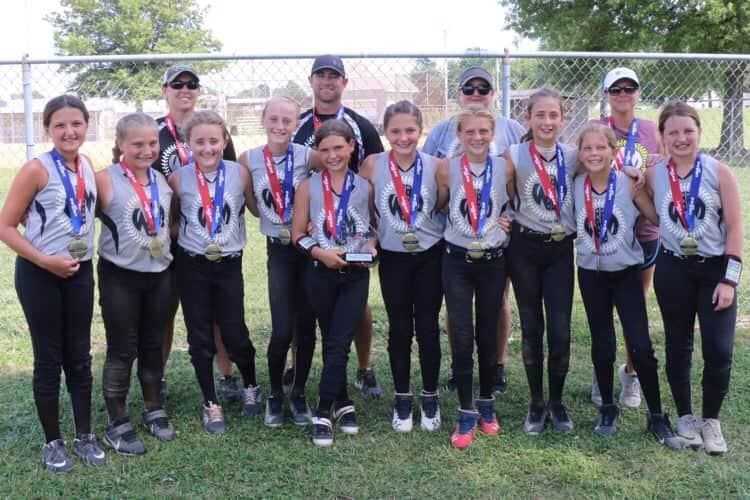 The Wabash Mission 09 (10U) softball team poses with their trophies following its third-place finish in the USSSA Great Lakes National Softball Tournament. They finished with a 6-2 record. 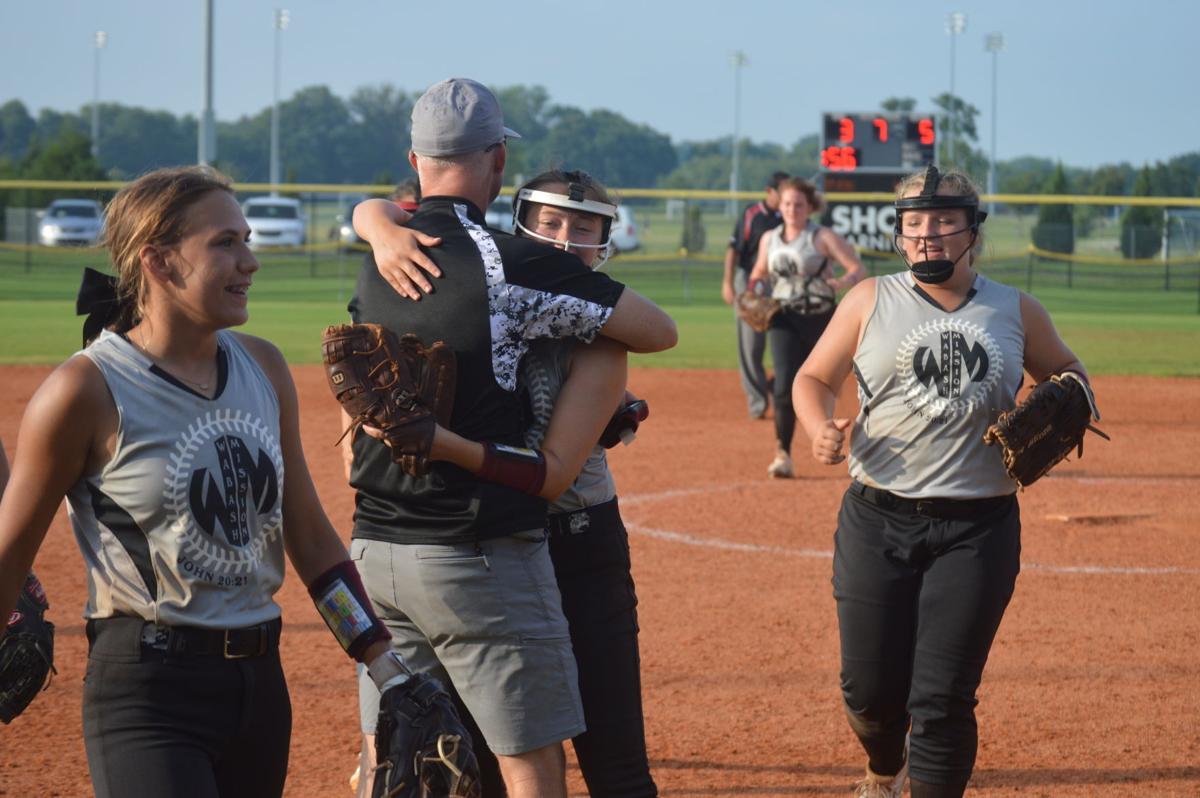 EVANSVILLE — For the Wabash Mission program, the USSSA Great Lakes National Softball Tournament could only be described as an incredible success.

The program’s 8U bunch certainly earned their fair share of experience this week, competing in seven games from Wednesday to Friday.

They emerged with a pair of wins, both over the Southern Indiana Crash, the first a 10-8 win, the second a 6-4 victory.

“All the coaches are very proud of the girls this season,” Head Coach Mike Lewis spoke of Mission 11’s tourney. “They put in a lot of hard work and determination and got a couple wins in one of the biggest tournaments in the country.”

Entering as one of the few nationally ranked top 25 groups in the tournament, Mission 09 certainly had high expectations entering the USSSA Great Lakes National Softball Tournament.

Head coach Josh Keepes’ group certainly didn’t disappoint, and had a blazing start to the tournament.

Following a 5-0 start, they faced arguably their toughest matchup to date against the Extreme, another nationally ranked foe and a heated rivalry.

Having advanced to the Semifinals with a trip to the Championship game on the line, the long stretch of games finally got to the girls.

They succumbed to the Z20 Bombers in a 7-3 defeat, sending them to the loser’s bracket, though they still had a chance to earn a championship game berth, but they’d have to defeat the Extreme once again.

In their final matchup however, it was the Extreme who edged Mission 09 late, scoring a 2-1 victory and knocking Mission 09 out of the tournament.

Regardless, their advancing to the Semifinal guaranteed them the best finish in program history — though that was quickly surpassed by Mission 07 — and they finished in third place.

For the tournament Mission outscored opponents 67-26. One of their top highlights included a no-hitter tossed by Quincy Keepes.

This group figures to be a fun one to monitor for years to come.

With their second place and 7-2 finish, Mission 07 set a new program best for the best finish in the USSSA Great Lakes Nationals — surpassing Mission 09’s mark set on the same day.

Like Mission 09, Mission’s 12U group entered as a nationally ranked group, but quickly shot up the rankings following a scorching hot start to the tournament.

Through their first seven games they outscored their foes 52-11, including several dominant outings by pitchers Gabby Hoke and Bella Andrews. Hoke and Rebekah Gill also notably tossed a combined no-hitter.

And everything appeared to be going in their favor. They rose to No. 4 nationally in the USSSA 12U C-class rankings, and were poised for the program’s first-ever championship appearance.

They began the first day considerably well, defeating Tippy Explosion 7-4 to advance. Still undefeated in a double-elimination style format, they’d have a pair of chances at the title, needing just one win to reign as champions.

Their opponent — the Kentucky Lady Prospects — a team they defeated 4-1 on Saturday to earn a berth in the Semifinal.

Unlike Saturday’s game however, the Lady Prospects were making solid contact off of Hoke, and Mission appeared to be experiencing some big game jitters. They were making some uncharacteristic errors, plays they’ve routinely made all weekend, but just couldn’t seem to convert.

Hoke left after an inning pitched with shoulder soreness, having allowed five runs, three earned, though with just one hit allowed.

Trailing 7-0 and looking to rebound from their shaky start, Hoke led things off in the bottom of the second with a single, followed by a single by Andrews. Their spirits started to rekindle, but were once again silenced after the Lady Prospects retired the next three batters.

Addy Brush would come on in relief late and threw well, but Mission ended up getting run-ruled in four innings, falling 11-0.

Fortunately they had another crack at it — unfortunately it’d be their third game of the day in 94 degree heat, on the heels of their first taste of adversity.

And while the Lady Prospects were rolling, the Mission bats couldn’t find their rhythm. They mustered just two hits in the 9-1 loss. Hoke battled through her shoulder fatigue to toss 41/3 innings, but allowed nine runs, six earned on seven hits, while striking out six batters in her tournament finale.

Sunday’s 1-2 finish wasn’t the ideal ending for Mission 07, but their run still eclipsed that of every Mission team to date. They remain in the national top 25, ranking No. 12 in the nation.

Expect to hear more and more of this group as they continue to grow and learn the sport.

The program’s eldest bunch competing endured a rocky start to the tournament, beginning 0-2 after an error plagued pair of defeats to the S.I. Aftershock and Thunder 05.

Some of the nerves at Deaconess Park in Evansville had finally gone and the group started to settle in. That, and a first inning first-pitch two-run homer by Libby Horton certainly helped.

They led 3-0 up until the bottom of the fourth, when the Freeze scored their first run on an error.

The lead remained until the bottom of the fifth, when the Freeze tied the game at 3-3 with time dwindling.

Rachel Gill — who tossed a complete game with four strikeouts — managed to get out of the jam, giving her team a chance to retake the lead and steal the victory.

In desperate need of a run in the sixth, Horton led things off with a single, providing a much needed spark to a pivotal inning. Rebekah Pittman reached on an infield single with one out, putting runners on first and second for Gill, who had a chance to give her team the lead once again.

Gill went first pitch swinging and popped it up down the first base line for the team’s second out of the inning, leaving their hopes in Jozie Carlson’s hands.

Carlson battled and came through — slashing a two-RBI triple, giving Mission a 5-3 lead, and giving them a chance to escape.

Gill remained on the mound, needing just three outs to secure the team’s first win of the season. She fanned the first batter, allowed a single to the second batter, but quickly rebounded with a flyout and a strikeout.

The team jubilantly celebrated, with Head Coach Todd Gill emerging onto the field to greet his daughter after she slammed the door shut on the Freeze.

For them, that game took the proverbial monkey off their back and allowed them to settle in. They went 3-3 through the remainder of the tournament, and were eliminated on Saturday.