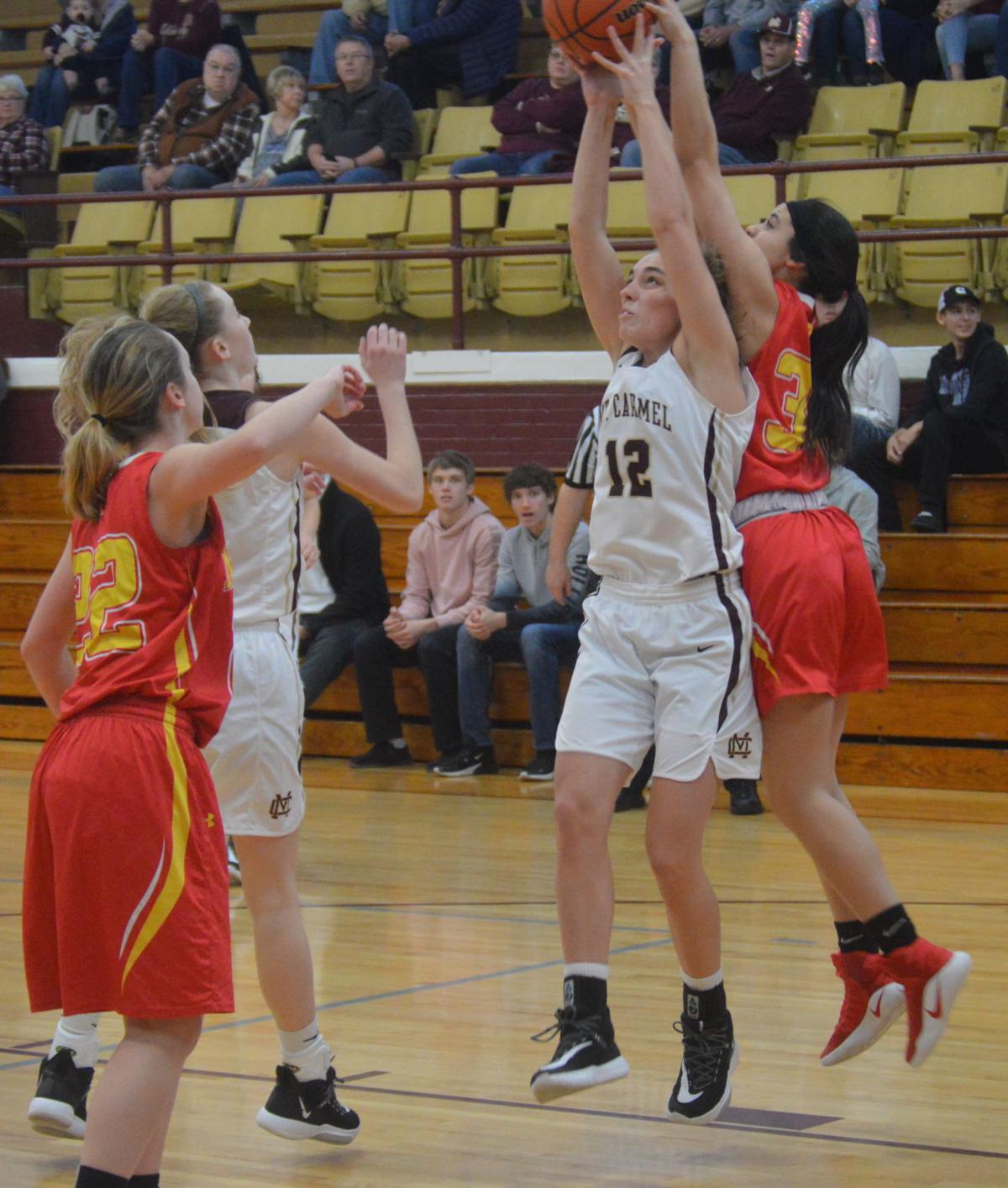 Mount Carmel senior Alli Kell battles for a rebound against Murphysboro on Dec. 7. Kell will play in her final home game at the Hilltop on Saturday. 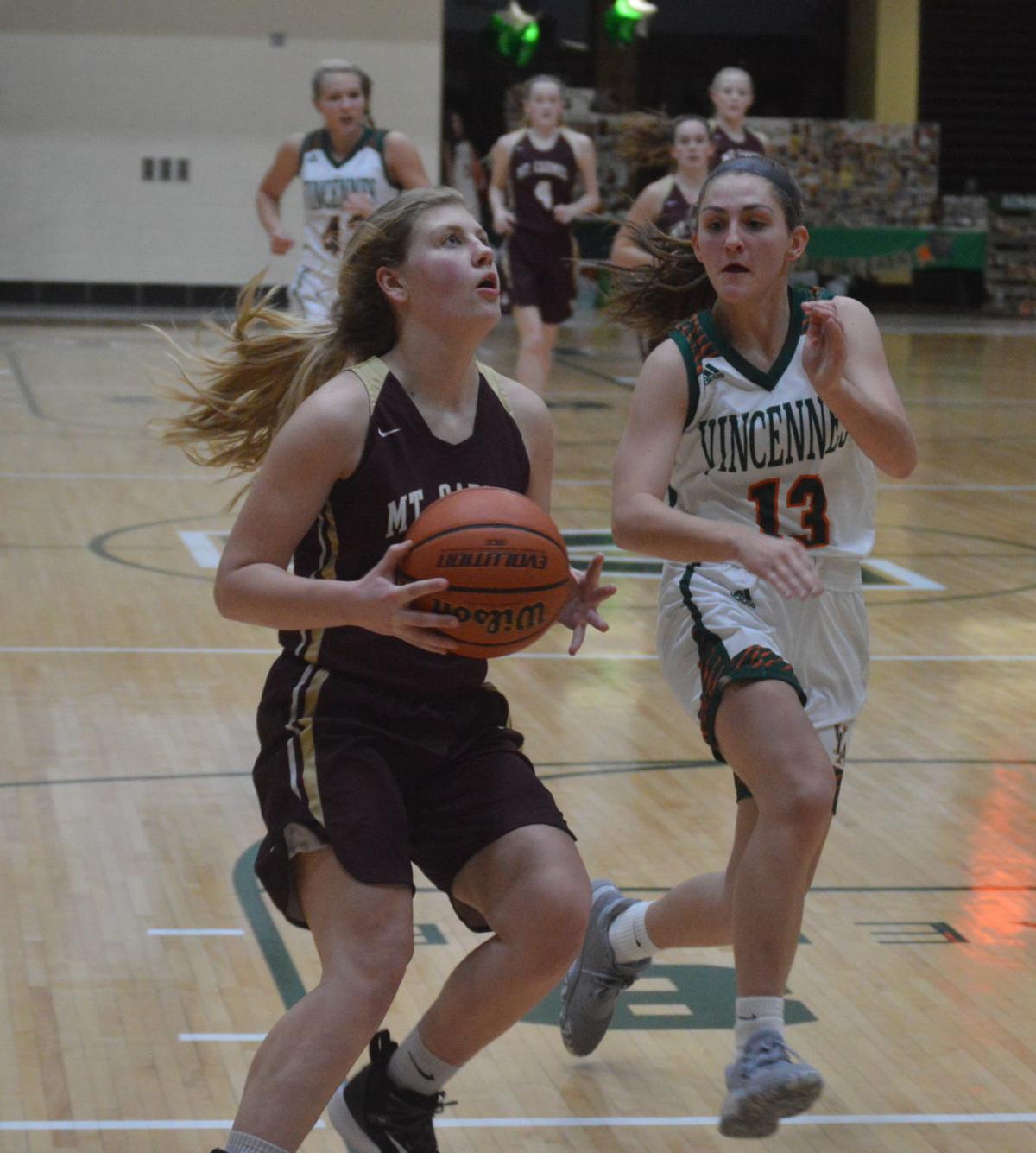 Mount Carmel senior Kassidy Drone slashes to the basket on Jan. 30 against Vincennes Lincoln. Drone will play her final home game as a Lady Ace on Saturday.

Mount Carmel senior Alli Kell battles for a rebound against Murphysboro on Dec. 7. Kell will play in her final home game at the Hilltop on Saturday.

Mount Carmel senior Kassidy Drone slashes to the basket on Jan. 30 against Vincennes Lincoln. Drone will play her final home game as a Lady Ace on Saturday.

MOUNT CARMEL — In time all good things come to an end.

The old saying is your high school days come and leave overnight, and that certainly feels to be the case for Mount Carmel seniors Kassidy Drone and Alli Kell.

Drone and Kell will suit up as Lady Aces for one final time at the Hilltop on Saturday, as the Lady Aces host Eldorado for Senior Night. Drone joked on Tuesday even just the thought of that being her final time playing in the gym just upsets her stomach and is unfathomable.

“It’s sad,” Drone said. “I’ve played here for four years and two sports. Every day from start of school to February I’m in this gym every day, practicing or playing a game, or even supporting other teams. Like this is where I come every day, this is like my second home. I feel comfortable here.”

As Mount Carmel’s most trusted wing, Drone’s been a multi-year starter for the Lady Aces, with her prowess from behind the arc headlining her skill set. She was called upon to fill a different role this year, however.

Mount Carmel Coach Tim Willis didn’t want to take away Drone’s strong suit, so she does play the vast majority of her time still on the perimeter, but now Drone’s become more attune to taking advantage of mismatches on smaller guards. Most of her low post looks come on cutting feeds under the basket, where Drone gets it low enough for the feed and a quick turnaround. To her credit though, she’s been incredibly efficient in the post, an area of her game in which she wasn’t nearly as comfortable prior to this season.

Willis added that Drone might be the first player he’s ever coached that’s been versatile enough to play the 1-4 positions. Her versatility really gives the Lady Aces a swiss army knife that’ll greatly be missed when she departs.

“We’ve posted her up quite a bit this year and we do it more and more as the season winds down,” Willis spoke of Drone’s role. “With Jada getting hurt for us, she was going to be our other point guard but when she went down we had to slide Kassidy over there. That kind of stopped us from doing as much ... Again, her versatility just gives us so many options. She came here as a freshman as a 3-point shooter and now she’s just an overall scorer, slasher, defensive player. She does it all for us.”

Their other senior, Kell, has served a vital role as one of the lone presences in a bleak Lady Ace front court.

Willis said that Kell entered her freshman year as a timid, unsure of herself, more quiet type of personality — as most freshman are. Her growth since that year though has been extraordinary.

Despite being stuck behind a logjam of forwards for much of her career, Kell started to come into her own toward the end of last season, according to Willis.

“When Alli Kell came in ... You had Kylie Applebey for several years, then you had Mollie, then Sela, then Meredith,” Willis spoke of Kell. “You had all of these kids and you just have to buy you time, keep digging and digging and you become the practice person that gets banged up all of the time. Now it’s her turn to dish it out instead of receive it quite so much, I think she’s enjoying that much more.”

Since then, Willis said Kell’s confidence has soared, with the senior forward now quickly moving on from mistakes she makes in a game and playing through them. This year she’s taken on more of a role as a rebounder and even scoring at times. She’s reached double-figures scoring on a couple occasions this season.

“Every year you could see the steps she took,” Willis added. “You could finally start to see it click about halfway through last year, you saw her really take that jump and then this summer, she really realized hey, I’m here, I’m going to play and do well. She’s had a really good career for us. She’s certainly seasoned defensively, does a nice job of keeping everything what we need down low. We give her their best big and we say she’s yours ... A really nice career and a nice finish for Alli Kell. She’s really played well for us this year.”

Couple their contributions and leadership and it’s been a perfect recipe for an incredible senior campaign. How incredible you might ask? Historically incredible.

With the season winding down the Lady Aces sit at 21-7, having eclipsed the 20-win plateau for the first time since Tyra Buss’ senior season (2013-14).

Drone, who helped bring the school it’s first 20-win season in volleyball in over a decade this past fall, said to be a part of such an honor, such an ending to her high school career is surreal.

“It’s very incredible, especially since I’ve gotten two 20 win seasons this year in volleyball and basketball,” Drone said. “Considering it hasn’t been done in a long time, it’s pretty cool to say my team got a 20-win season this year.”

“We’ve had other good years as well since then, a lot of it is just going out and playing,” Willis added. “Last year, most of these kids other than Kassidy hadn’t started before so it just takes a little bit to learn. It’s hard to realize that hey, this is the first time they’re under the gun, it’s my issue now ... You could see over the summer they were going to have a good year. They had just improved so much, had confidence and shook things off better. I think just the maturity of the whole group and that starts with Kassidy and Alli leading the girls.”

Though Senior Night’s sure to be an emotional night for both girls, as well as Willis — who admitted he’s not looking forward to the pregame speech on Saturday — their season won’t end there.

They’ll begin postseason play next week in Newton where they’ll face Robinson on Monday, and in the event of a victory, Pana on Tuesday. If they can secure both victories, they’ll earn a rematch with Teutopolis, a team that defeated the Lady Aces 62-39 back on Jan. 11.

Willis and Drone both said the Lady Aces are continuing to eye Ttown, though don’t want to overlook the first two matchups. The Wooden Shoes have dominated the Lady Aces historically, having won the last seven matchups (dating back to 2007) between the two schools. Drone hopes this year’s team can be the one to end the streak.

Saturday’s Senior Night for Mount Carmel will begin with the JV teams are 6:30 p.m., with Senior Night festivities and the varsity tip-off against Eldorado to follow.