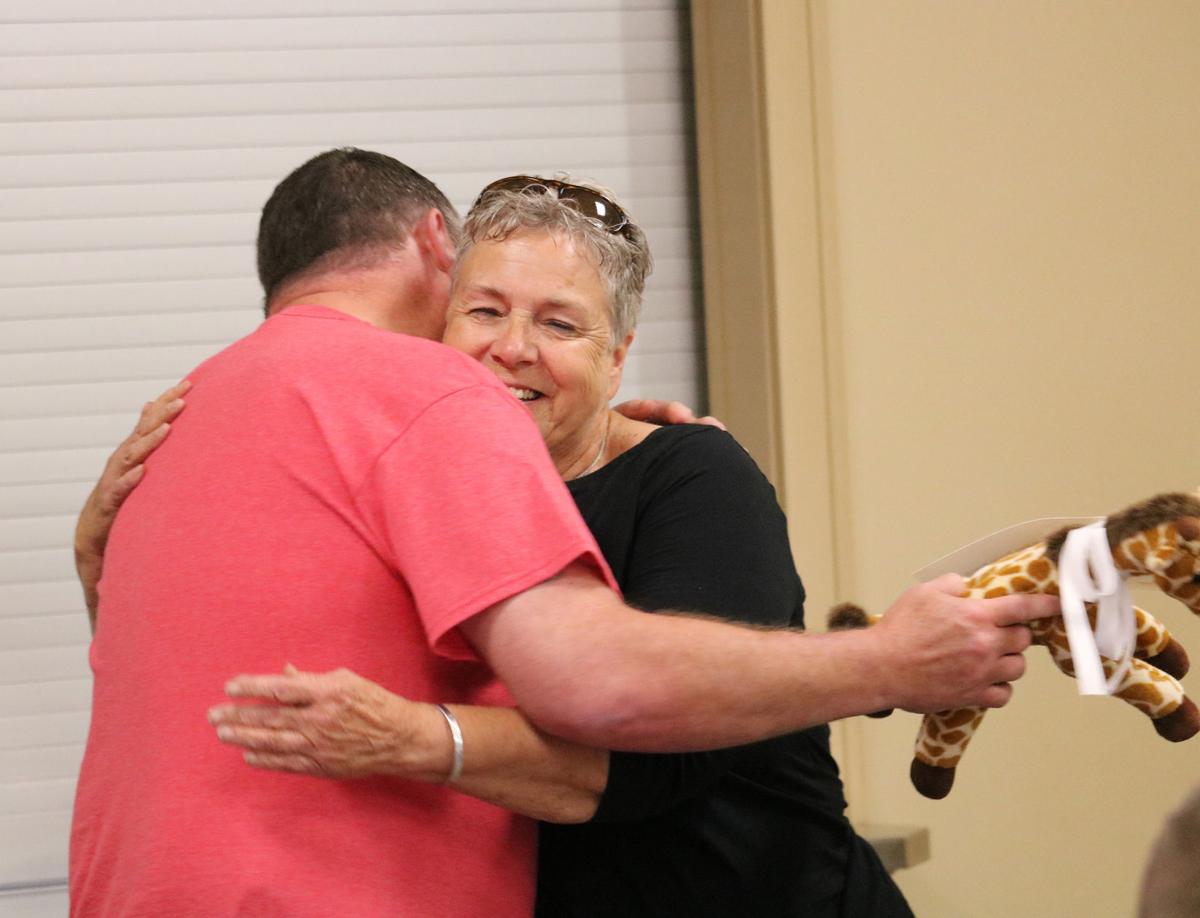 Priss Parmenter hugs Officer Greg Hart on Wednesday after presenting him the "Sticking Your Neck Out" award for his work with the youth in Wabash County. 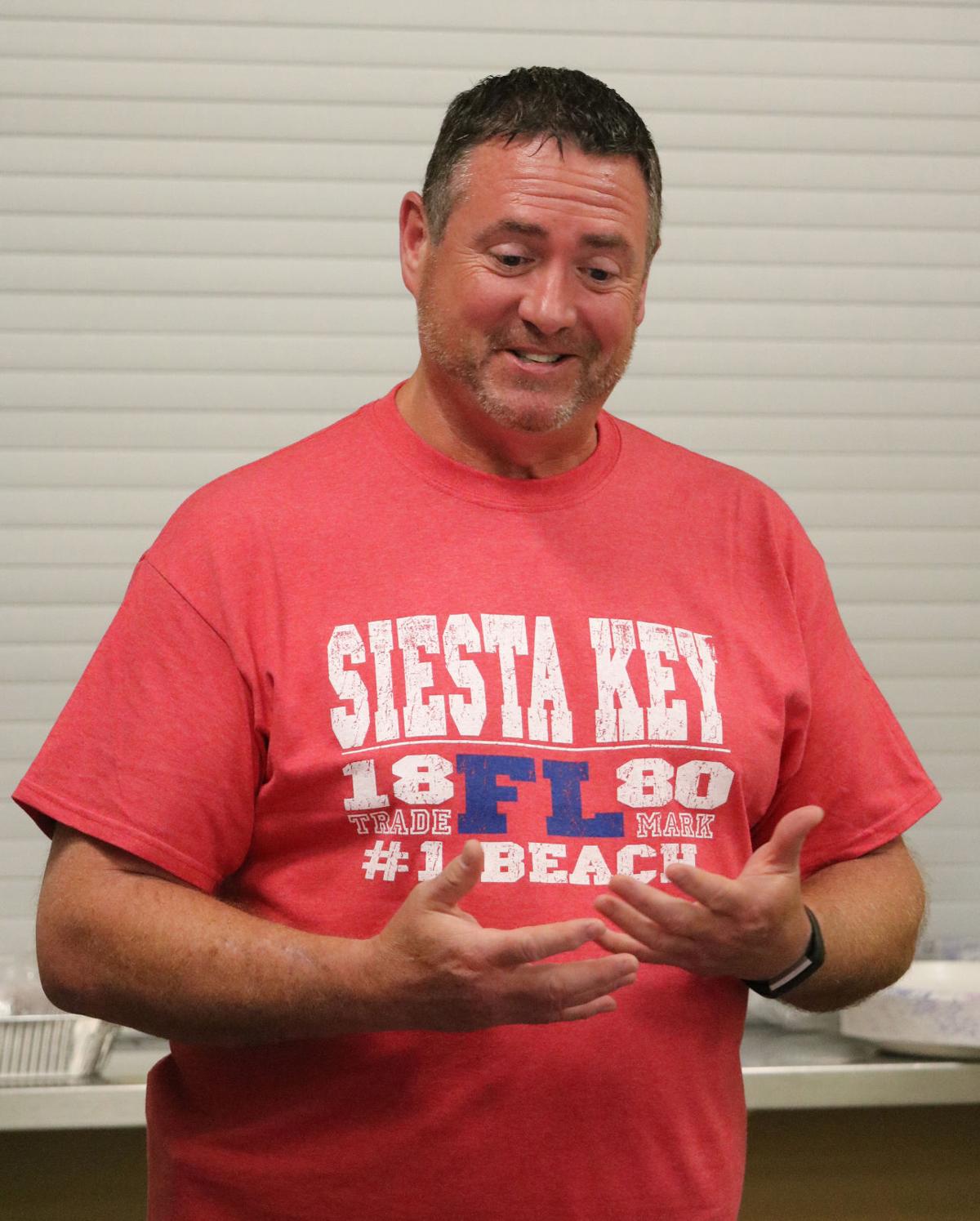 Greg Hart shares memories of his time serving as a school resource officer in Wabash County June 14. He will be retiring and moving to Florida in September.

Priss Parmenter hugs Officer Greg Hart on Wednesday after presenting him the "Sticking Your Neck Out" award for his work with the youth in Wabash County.

Greg Hart shares memories of his time serving as a school resource officer in Wabash County June 14. He will be retiring and moving to Florida in September.

MOUNT CARMEL — The Wabash County Project Success Coalition's "Sticking Your Neck Out" award is usually presented to someone who goes out of their way to ensure the success of area youth.

Most recently, the award was given to someone within the coalition itself — someone who has worked tirelessly with kids to make sure they are on the right path.

"We always pass him over because he's in our coalition and he does the work with us," said Jodi Hanisch, WCPS project director. "But this time, since he's leaving, we really want to recognize Greg Hart for doing all the work he's done."

School Resource Officer Greg Hart was honored for "sticking his neck out" Wednesday during his last coalition meeting. He will be retiring in September and moving to Florida to be closer to his family.

A tearful Priss Parmenter shared some memories of her time with Hart before presenting him with the stuffed giraffe award.

"We started working together in 2006," Parmenter began. "I don't think the community really understands or appreciates all the things that he's done."

Parmenter remembered when they would walk at risk kids across the stage on the day they graduate and how important that was for them.

Hart also said a few words about his time working with Parmenter and how she completely changed his mindset about working with at risk youth.

"My dear friend Priss, she literally drug me into implementing and using restorative practices here in Wabash County," he said. "I say drug me kicking and screaming because for 14 or 15 years I was taught you're a cop, you arrest people, you put them in jail, you go home at the end of your shift and it's a good day. Now with the whole climate shifting with especially not putting youth in jail and getting them to realize the harm they've cause and repairing the harm they've caused instead of putting them in jail and expect them to get better. When they're in jail they are not around the best of people to get the best advice — they're getting jailhouse advice."

Hart said he will mostly miss working with the kids. For the past seven years, he has been teaching a class called Insight at Mount Carmel High School that is an early intervention class for tobacco and alcohol.

"I became a police officer because of an incident involving my own kids that was not handled correctly, so getting to work with kids has always been my goal," he said. "The SRO job was a dream come true for me and I'm really going to miss working with kids."

Hart plans to join another coalition in Florida, similar to Wabash County Project Success, to still be involved with helping the youth.

The grant that supported the school resource officer program has expired, and Project Success has already started searching for another grant or ways to raise money to support another officer for the schools. There are local officers interested in becoming the new SRO, but it comes down to funding right now, Hart said.

"It's been a good 17 years here ... I really hope the community can find a way to keep the SRO program," Hart said. "Our kids deserve it."